World Water Day held on 22 March every year since 1993, focuses on the importance of freshwater. In 2020 the United Nations dedicate the WWD to the water and climate change: more efficient use of water resources reduces greenhouse gases. OpenCoesion publishes a Data Card dedicated to cohesion policies and human right to access safe & clean drinking water, which accompanied with a new "Thematic study on the projects in progress" available in the Open data section of the portal.

Taking the occasion of the World Water Day, the Italian National Institute of Statistics has published a new report - "Istat statistics on water | Years 2018-2019" - summarizing all sector available statistics. Istat underlines a reduction in water consumptions for drinking use (419 liters per day, in 2018) which are, nevertheless, high, a high level of satisfaction with the integrated water-supply service (appreciated by 86% of the population), excessive consumption of mineral water, and persistence of some problems. In particular: 8.6% of families complain about irregular water-supply within their households (in 2003 it was 17.0%); 40 Municipalities are not connected to the sewage system; in 2018 the 37.3% of the water within the distribution system went lost, thus did not reach final users (it was 39.0% in 2016); advanced water-treatment plants, which represent 12.9% of the total plants, treat more than 66.7% of the actual pollutants produced on the national territory (Istat, 2015).

For more than a decade, cohesion policies have addressed these aspects, with interventions that mainly concern the integrated water service, and in particular water-treatment and  (drinking) water-supply infrastructures. During the preparation phase and working tables at national level dedicated to the next 2021-2017 Programming period, the importance of interventions in this sector was confirmed, with the aim of increasing the share of the population served by water-treatment plants and of reducing the leaks in the water-supply systems.

In particular, Italy is currently affected by 4 distinct infringement procedures relating to the treatment of urban waste waters, that have been launched due to the failure or low-level of application of the infrastructure requirements contained in Directive 91/271 / EEC of 21 May 1991, subsequently amended by Commission Directive 98/15 / EC of 27 February 1998 and by Regulation (EC) no. 1882/2003 of 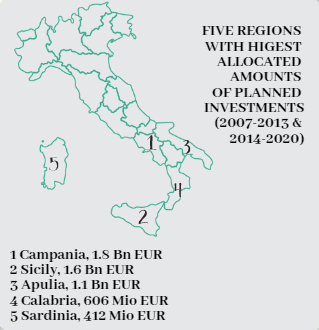 the European Parliament and of the Council of 29 September 2003.These infringement procedures, two of which are quite recent, involve over 1.000 conglomerations scattered over almost all autonomous regions and provinces, particularly in the southern regions. In the Programming periods 2007-2013 and 2014-2020, the n.1.064 of projects available in the National Monitoring System and published on OpenCoesione (data updated to 31st October 2019) concern water-treatment, with 68.2% of funding allocation, and n. 1.064 of projects concern (drinking) water-supply. 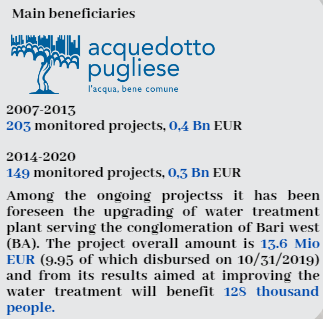 The European Regional Development Fund supported the implementation in the 2007-2013 Programming period, of the huge environmental project "Completion of the Leccese siphon Ionic side - conducted from the San Paolo water-tank to the Seclì water-tank ". The project financial allocation was € 23.5 million. The intervention created the pipeline (DN 1400 steel pipe) of approximately 37.5 kilometers from the new San Paolo tank to the existing Seclì tank, which transports up to 1.400 liters of water per second.

Some aqueducts in the provinces of Piacenza and Parma are fed by waters in which the presence of hexavalent chromium is registered, in some cases above the legal limit, due to the particular chemical composition of the rocks from which are made naturally the aquifers in the area. Hexavalent chromium, potentially carcinogenic to humans if taken in large quantities, is a type of heavy metal that can occur in nature, and for which a more stringent regulation has been adopted by the Italian Ministry of Health regarding the maximum limit allowed per liter of water. The funds of the cohesion policies in the 2014-2020 Programming period will intervene in Emilia-Romagna in order to mitigate this danger for citizens: therefore the expenditure of 7 million euros has been allocated for a total of 35 projects (to be launched after 31st October 2019) which will be implemented by IRETI spa, an enterprise of the integrated water service operator.

ASOC and water
Water At the School of OPENCOHESION

Among all the all teams that participate in this school-year 18/19 to the activities of "At the school of OpenCohesion" - innovative educational programme aimed at promoting and developing principles of active citizenship in Italian schools starting from Open Data on projects funded by European and Italian national resources - yet eleven teams of students based in the provinces of Bari, Campobasso, Caserta, Catania, Fermo, Vibo Valentia and Trapani, have chosen to monitor projects related to the water cycle, showing great attention and high level of awareness.

The team PantaRei, of Scientific high-school ls Enrico Fermi Aversa (Caserta), participates to the activities of ASOC and is monitoring the project Risanamento ambientale e Valorizzazione dei Regi Lagni - Fase 2 foreseeing the interventions on the water-treatment plant that discharge into the Regi Lagni - a network of water channels that extends over an area of 1,095 square kilometers, including 108 Municipalities of the Metropolitan City of Naples, Caserta, Avellino and Benevento, counting approximately 2,796,360 inhabitants.

2) The team F4UL7 of Technical-industrial school I.T.T. “G.E M. Montani Fermo (Marche) participates to the activities of ASOC and is monitoring the project Improving from 35.000 to 45.000 AE and process efficiency of the water-treatment plan of Salvano in the Municipality of Fermo aimed at ensuring the sustainability of environmental conditions through the renewal, expansion and enhancement of the water-treatment service. 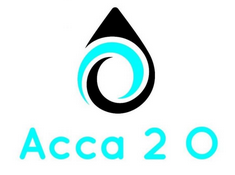 3) The team Acca2O of Istitute Magistrale Ist. Omnicomprensivo "Scarano" Trivento (Campobasso) participates to the activities of ASOC and is monitoring the project Actions aimed at reducing water loss from public water-supply distribution networks (Municipality of Trivento). The intervention is aimed at preventing the water losses of the municipal aqueduct, improving at the same time its management and maintenance. 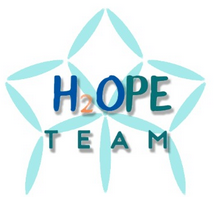 4) The team H2OPE of High school institute  I.I.S. "L.S. V.Fardella-L.C. L.Ximenes" Trapani participates to the activities of ASOC and is monitoring the project Gibellina - Re-use of waste waters for irrigation of public green areas, aimed at the reuse of waste water in the municipality of Gibellina (TP) with possible replication of this best practice in all national territory. 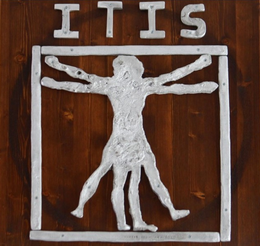 5) The team SAVE THE SEA of High school institute I.I.S. I.T.G. E I.T.I. Vibo Valentia participates to the activities of ASOC and is monitoring the project Regional Council Resolution 182/2015 Efficiency and functional improvement programme for water-treatment plants and urban wastewaters lifting stations in the coastal municipalities of the Calabria Region. Industrial development consortium for the province of Vibo Valentia aimed at water-treatment of sewage waters in the coastal area in Calabria. 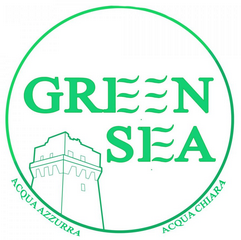 6) The team GreenSea of High school institute I.I.S.S. "Galileo Ferraris" Molfetta (Bari) participates to the activities of ASOC and is monitoring the project Construction of a submarine wastewater pipeline in Bisceglie, Corato, Molfetta, Ruvo Terlizzi, aimed at ensuring the environmental sustainability of development and adequate levels of environmental services for the population and enterprises. 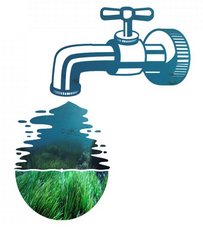 7) The Team Posidonia of High school institute I.I.S "Giuseppe Ferro" Alcamo (Trapani) participates to the activities of ASOC and is monitoring the project Castellammare del Golfo - Construction of new water-treatment plant (33506), aimed at ensuring the sustainability and protection of the marine environment. The final goal of the Posidonia team is to activate the construction works of the plant by triggering an action that will affect both the local community and tourists. The slogan of the Posidonia Team monitoring: "Clean the immensity of the sea, dirty of bureaucracy" 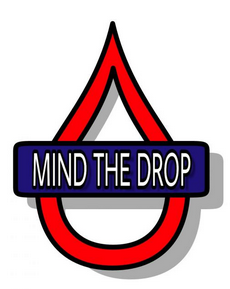 8) The team Mind the Drop of High school Institute "Lombardo-Radice" in Bojano (CB) participates to the activities of ASOC and is monitoring the project  Improving the municipal water-system network for the reduction of water leaking. Despite to the fact that Bojano is a municipality with abundance of water sources, its water-system of distribution is losing water everywhere. The team members' aim is to raise awareness of the citizens that "every drop matters". 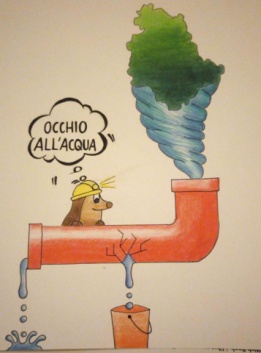 9) The Team "Mind about water" of High school technical-commercial institute of Magione (PG) participates to the activities of ASOC and is monitoring the project "Research and containment of water leaking in the water-supply distribution network on the territories of the Sub-sector 1 and 2", that concerns 39 municipalities in Umbria region, for 6,4 EUR of project budget allocation, aimed at using the cohesion funds for research and mapping of the water leaking sources and repairing/substituting the old water pipes. 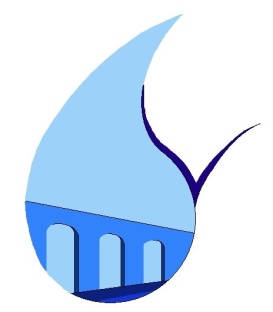 10) The Team third B class of Science High school "Leonardo Da Vinci" of Vairano Patenora (CE) participates to the activities of ASOC and is monitoring the project "Municipality of Vairano Patenora - adaptation and regeneration of the existing water-supply distribution network". The motivation is given by a concrete problem: the water at school is missing frequently despite to the presence of the bottled water industries on the local territory. The project budget allocation is 3,1 Mio EUR with 74% of the disbursement rate (at 31 October 2019). 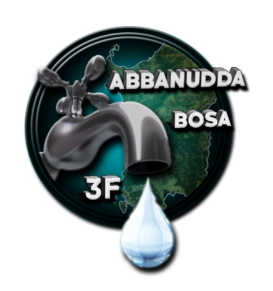 11) The Team Third F class of High school Institute "G. A. Pischedda" of Bosa (OR) participates to the activities of ASOC and is monitoring the project  "Raising the efficiency of the water-supply distribution network of the Municipality of Bosa". The project budget allocation is 1,95 Mio EUR - aimed at repairing the most critical parts of the water-supply pipes and the planning the implementation of the on-distance control system. The objective of the monitoring is to verify that the project activities carried out would effectively solve the water-supply problems of Bosa municipality citizens.