Brief no. 29 - Transparency in the implementation of cohesion policy in Europe: Evidence and lessons learned from online surveys in the 2007-2013 cycle

This OpenCoesione Brief introduces an update to that of 2015 on the survey carried out by Italy under the OpenCoesione initiative on the characteristics of the "lists of beneficiaries” of Structural Funds across Europe (Brief no.7 - Open data on beneficiaries of EU Structural Funds in Europe), investigating further into certain findings regarding the development of the forms of publication of information available at the European level on those who benefit from community resources for cohesion policy.  Launched in 2010, the survey involved a historical analysis of the status of information posted online relating to ‘lists of beneficiaries’ of Operational Programmes (OP) under the European Regional Development Fund (ERDF) and the European Social Fund (ESF) during the 2007-2013 cycle and, with the data updated to 2015, it analysed strategies for the openness and transparency of Operational Programmes co-financed by EU Structural Funds during the transition towards the full implementation of the 2014-2020 cycle.

The updated 2015 data represents a ‘final account’ on the transparency and legibility of projects financed during the 2007-2013 cycle in the EU as a whole. The results from this latest version show how the general framework on transparency has consolidated over the years and has developed a more uniform adoption among different Member States. At the same time, however, some concerning situations have been observed in which the publication of the initial content relating to the 2014-2020 programme (with the creation of new dedicated websites) has been associated with a failure to update or difficulty to access certain information on the 2007-2013 period. If this circumstance is not rectified, it could significantly weaken the path towards transparency taken at the European level on the policy of cohesion. In fact, only if historic information on past programming periods continues to be available over time and is easily trackable and accessible online monitoring can offer effective support for reflection on results, ex-post policy assessment and in-depth territory-based investigation. 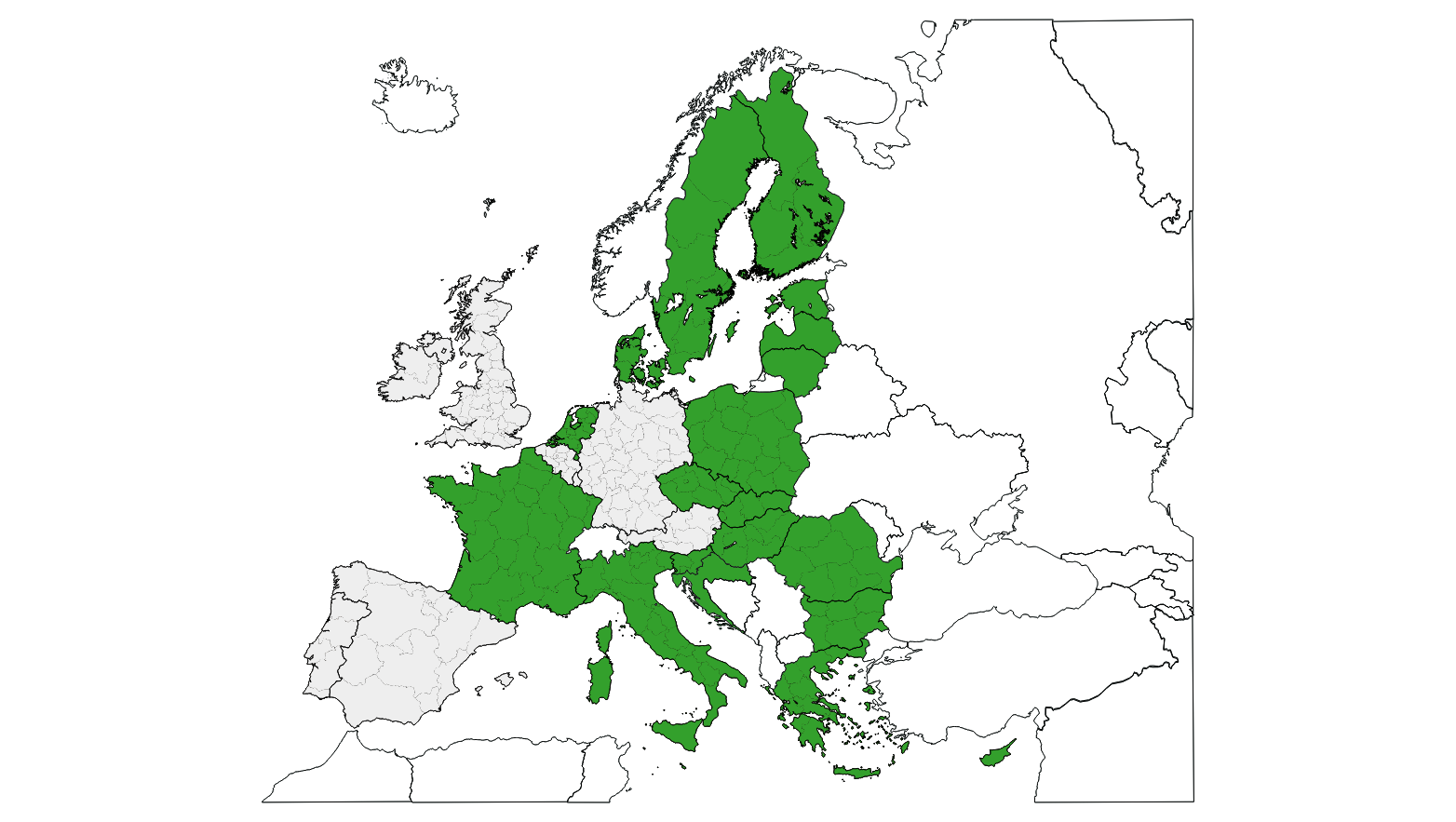 Shown in green are the Member States which publish information on ‘lists of beneficiaries’ of 2007-2013 Structural Funds in Europe via a dedicated national website.

In terms of transparency on cohesion policy in Europe, there is a general confirmation of the positive long-term trend observed, as already discussed in A bit of OpenCoesione 21 (Transparency of ‘lists of beneficiaries’ of Structural Funds in Europe: 2014 trends), which was consolidated this past year with the progressive development and publication of dedicated national websites. This trend, which in some cases (such as with OpenCoesione in Italy) was seen in practice even before it appeared in the regulatory requirements (EU Regulation No 1303/2013) for the 2014-2020 cycle, reflects the growing understanding of the importance of the availability of data on processes and public activity and of the facilitating role of a dedicated website offering information on all the operational programmes of a Member State.

Looking at information published on a case-by-case basis, the trend over time of different transparency and openness indices calculated on certain data characteristics (e.g. format, completeness or presence of effective browsing tools) confirms the general long-term improvement in online publication channels for information on beneficiaries and on operations financed under the ERDF and ESF.

Figure 2 shows the 2010 to 2015 trend of averages for transparency and openness indices identified for each European Operational Programme for different key aspects related to data publication.

The indices are synthetic indicators calculated based on different variables as part of the survey on characteristics of ‘lists of beneficiaries’. For details on the individual variables and indices see the survey metadata.

However, it is important to point out the deterioration of the “Financial Data” index in 2015 compared to 2014 which, as expected, points to a reduced availability of data on projects from the 2007-2013 cycle for certain OPs (concentrated in particular in Belgium, Germany and Spain). This index, which by design is particularly sensitive to database changes, shows how certain governments have reduced the available details on financial information published in relation to 2007-2013 projects.

To show how regulatory efforts have declined in terms of transparency results in different countries, figure 3 shows indices on the level of compliance of 2007-2013 national and regional programmes with the regulations, considering both the 2007-2013 provisions and those for 2014-2020. The indices are created as a percentage of the information published to date out of the total information fields required by regulation.

Looking at the requirements from the 2014 2020 regulations, the programmes from Eastern Europe, as well as Holland and Finland, show higher levels than those required. Currently, Poland is the only country that has a national website which complies with all the publication requirements under the new Regulation, including the provision on dual language and an open, non-proprietary format. Italy should also be able to increase its level of compliance from 82% to 100%. The OpenCoesione website should soon be able to ensure all elements presently missing in order to fully comply with the 2014-2020 regulatory requirements with the publication of an English version of the site and information on projects deriving from the 2014-2020 Unified Monitoring System as soon as it becomes available, including a short description of each procedure.

The evidence collected seems to indicate that where there is still no national dedicated website in place, the managing authorities are not making efforts to improve transparency and to facilitate the reuse of information already online for the 2007-2013 cycle, and are postponing improvements to the data for 2014-2020. As soon as the national dedicated websites - which are specifically indicated 2014-2020 - publish information on the approved projects for the 2014-2020 cycle in accordance with the required specifications (likely over the course of 2016), significant, further improvements can be made.

If the standards imposed at the regulatory level are to be largely met in the short term, the additional goal for the transparency of cohesion policy in the 2014-2020 Programming shall concern the publishing of data in addition to that required by the European regulations and the planning of more accessible publication procedures.

For further information on OpenCoesione you can check out the FAQs at http://opencoesione.gov.it/en/faq/.