The 2007-2013 programming period of cohesion policy is financed by European and national resources. The governance of the 2007-2013 cohesion policy, the strategic objectives and resource planning are defined within the documents illustrated in the following infographic. 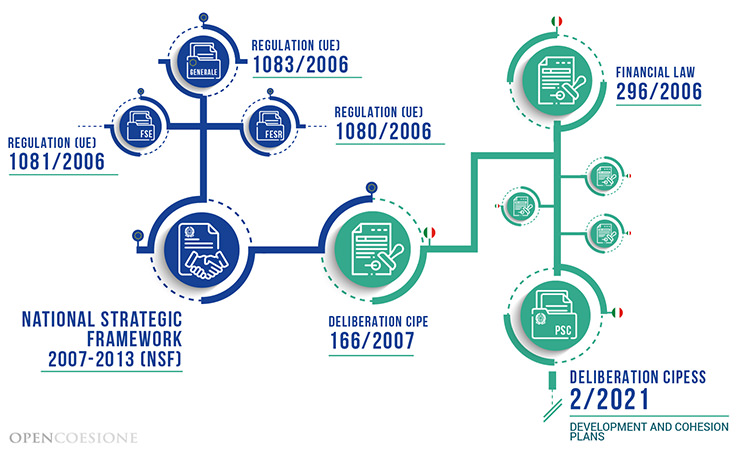 The national strategy of reference for the 2007-2013 period of cohesion policies is represented by the National Strategic Framework (NSF): the document, approved with European Commission Decision C (2007) 3329 of 13 July 2007 and with CIPE Resolution no. 174/2006, represents the reference for the programming of both the European structural funds and the additional national resources, which for the first time take on a multi-annual horizon.

Paragraph III. 4 of the National Strategic Framework introduces the system of "Measurable objectives for public services provision", which foresees, for the 8 southern regions and for the Ministry of Education, University and Research, quantified targets for 11 statistical indicators to be achieved in 2013 and related to four objectives referring to education, care services for children and the elderly, urban waste management and integrated water service.

The Fund for Underutilized Areas (FAS) - representing strategic interventions financed with additional national resources -  was renamed during the programming period into Development and Cohesion Fund (FSC) by the means of the legislative decree no. 88 of 31 May, with an objective of providing planning and financial cohesion to the set of additional nationally funded interventions aimed at economic and social rebalancing between the different areas of the country. FAS/FSC had seen, for the whole period between 2007 and 2014, numerous adjustments of the allocation, which have also redefined the strategic guidelines.

During 2021, a reprogramming and simplification of the FSC programmes was started referring to several programming periods, including 2007-2013, as defined by article 44 of Legislative Decree 34/2019 ("Urgent measures of economic growth and for the resolution of specific crisis situations "). The new instrument of the Development and Cohesion Plan (PSC) was also introduced.