This page provides a chronological list of awards and other recognition given to the OpenCoesione initiative.

Here is a selection of articles about OpenCoesione in newspapers, magazines and blogs.

Here is a selection of experiences on the reuse of OpenCoesione data.

EC, Quality of Public Administration - A Toolbox for Practitioners (2017)

OpenCoesione is mentioned in the 2017 guide by the European Commission as an “inspiring example” of open government (section 2.3.1) and in the 2015 edition in relation to ethical government and combatting corruption (section 2.2.1).

European Parliament, How the EU and Member States manage data transparency and accessibility on EU funds  (2016)

This study by the European Parliament points to OpenCoesione as a prototype for communication and transparency in the use of European Structural and Investment Funds (section 4.1).

The OpenCoesione initiative and the OpenCoesione goes to School project were named as some of the best initiatives promoted within the scope of the Open Government Partnership for the results achieved and for the promotion of civic engagement (pp. 6-7).

The OpenCoesione goes to School (A Scuola di OpenCesione - ASOC) project was selected as an example of best practice by the European Data Portal, an initiative supported by the European Commission with the goal of gathering data and metadata and promoting the reuse of information available on public websites of Member States.

Agency for a Digital Italy, National Guidelines for the Promotion of Public Information (2016)

These guidelines point to the OpenCoesione initiative as an example of best practice to be emulated for the architectural aspects of data publication and confirm the capacity of OpenCoesione to generate engagement (Action 7-14).

OpenCoesione was previously included in the 2014 Guidelines as an example to be followed for the initiative’s capacity to generate engagement, which completes the process of opening data with a view to open government (Guideline 4, section 5.2.4).

The OpenCoesione goes to School (ASOC) project was cited by Italy’s National Digital Education Plan as a good example of a project of civic monitoring and data journalism that makes active use of online technologies (Action 15 – Innovation in the development of applied digital skills).

The OpenCoesione goes to School (ASOC) project was one of the case studies selected by the OKFN as an example of international best practice in the use of open data in the field of education (pp. 26-37).

OpenCoesione was included as an example of best practice in the Effective Public Investment Toolkit published by the Organisation for Economic Co-operation and Development.

EC, Quality of Public Administration - A Toolbox for Practitioners (2015)

OpenCoesione is mentioned in this guide by the European Commission as an “inspiring example” in the area of ethical government and combatting corruption (section 2.2.1).

OpenCoesione was selected by the Organisation for Economic Co-operation and Development as an example of best practice in increasing transparency, improving the use of Structural Funds, facilitating investment decisions, and encouraging new services (Box 3.9).

OpenCoesione received the 2015 award in the Government category for its ability to unite the transparency of open data on projects financed by cohesion policies with analysis, active monitoring, and the use of open data in schools. 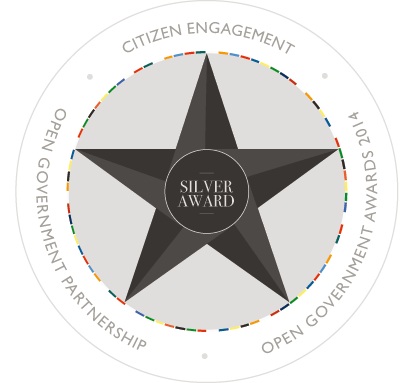 Italy’s OpenCoesione-Monithon candidacy came fourth out of 33 countries at the 2014 OGP Awards and was given the silver award.

OpenCoesione earned one of the twelve awards of Forum PA 2013 for “dynamic transparency” initiatives, recognising the government bodies most active in the pursuit of accountability.